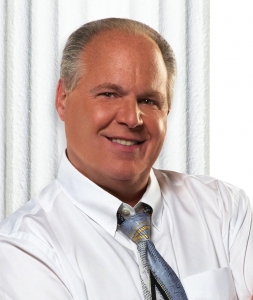 (Born January 12, 1951) is a conservative American radio talk show host and political commentator. Since he was 16 Limbaugh has worked a series of disc jockey jobs. His talk show began in 1984 at Sacramento radio station KFBK, featuring his ongoing format of political commentary and listener calls. In 1988 Limbaugh began broadcasting his show nationally from radio station WABC in New York City. He currently lives in Palm Beach, Florida, from where he broadcasts The Rush Limbaugh Show, the highest-rated talk-radio program in the United States. Talkers Magazine in 2012 lists Limbaugh as the most-listened-to talk show host with a weekly audience of 15 million.