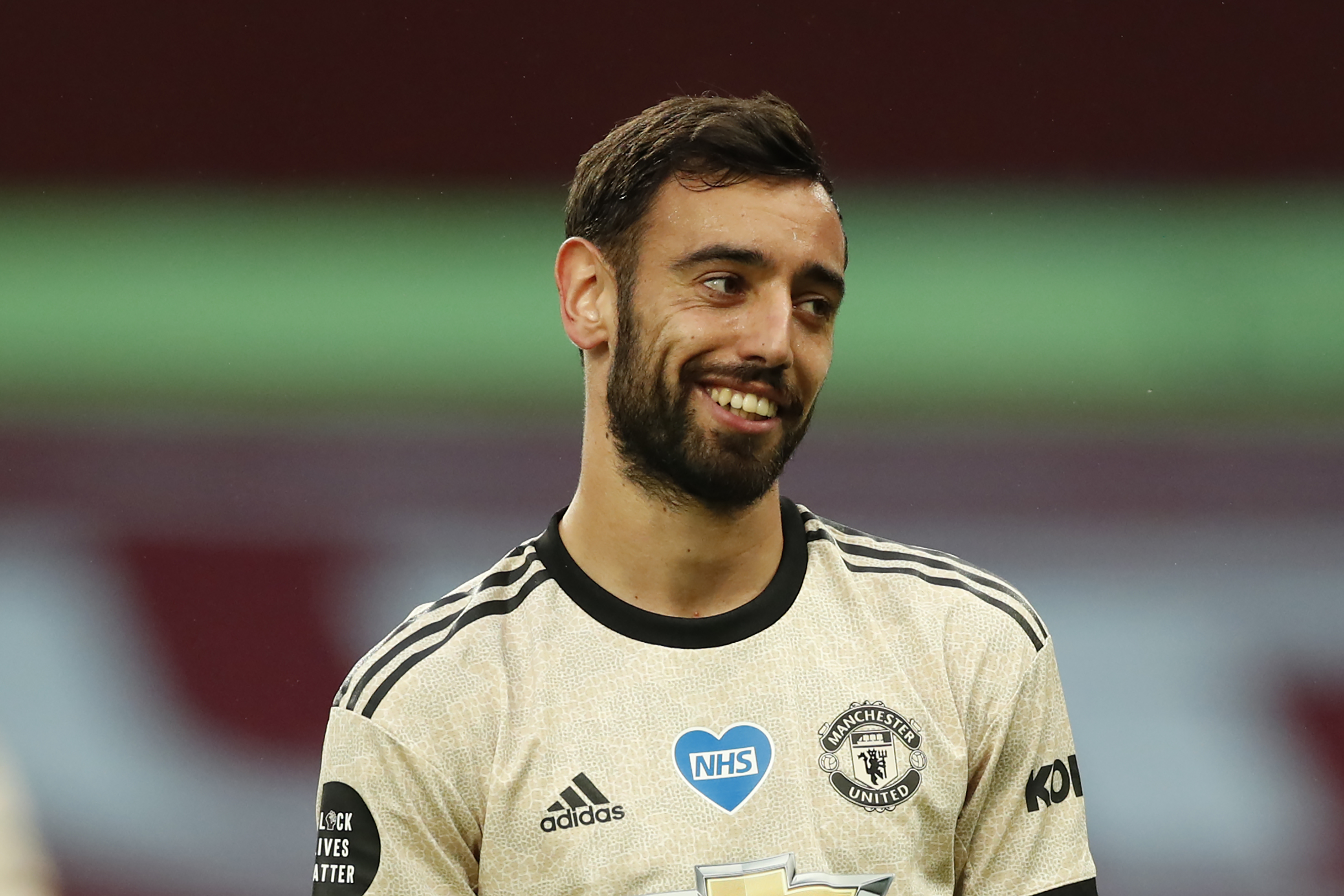 There hasn’t been much to shout about at Manchester United over the last few years.

The success enjoyed under legendary manager Alex Ferguson feels like a distant memory for a global fan base that has watched its once great club lurch from one bad decision to another.

An FA Cup win in 2016 under Louis van Gaal and Europa League glory under Jose Mourinho in 2017 were two of the highlights in what’s been an uninspiring period since Ferguson retired in 2013 — and a far cry from the 38 trophies won by Scot in his 26 years at the club.

The future didn’t look much brighter back in January. The club, now managed by former player Ole Gunnar Solskjaer, found itself fifth in the league table by New Year.

The football was poor, the atmosphere was toxic and star man Paul Pogba, once seen as the saving grace, looked set to leave as soon as he could.

But, fast forward seven months, and there are now signs of new life under Solskjaer, most notably since the arrival of one Bruno Fernandes.

The Portuguese playmaker turned up at Old Trafford from Sporting Lisbon in January and was thrown into a team lacking creativity, quality and leadership.

Fortunately for his new employees, it seems Fernandes has all three of those attributes in abundance.

Since his debut at the start of the year, United had not lost a game in the league, rising up the table to finish third and qualify for next season’s UEFA Champion League for the first time since the 2018-19 season. It was a remarkable feat considering the club started the campaign by making its worst start to a league season in 33 years.

What’s more, Fernandes brought excitement back to the red half of Manchester after years of uninspiring, and often woeful, performances.

His eight league goals and seven assists demonstrate the sort of player United now has on its hands.

“He [Fernandes] told me about the league, how intense it is to play in that league,” Porto star Danilo Pereira told CNN Sport.

“It’s not a surprise for me to see the impact he’s had in Manchester. I think United can return to their golden years with him and Pogba and other players.”

If such a thing as a typical Manchester United player exists, Fernandes would surely be it.

A risk-taker, exciting to watch and able to cope with the extreme pressures of playing at one of the biggest clubs in the world, the attacking midfielder has become an instant hit.

He’s been a leader from day one; stepping up to take (and score) six penalties during his short spell at the club — including the pivotal spot-kick against Leicester City which helped United on its way to Champions League football next season.

Ex-players and pundits alike have fawned over his performances since he moved to England, where he’s won the Man of the Match award in almost every game he’s played.

“You can see that he’s got the talent and he’s not scared. He wants the ball, which I would expect from a very good player,” former Premier League star and current Monaco player Cesc Fabregas told CNN Sport.

“But what I like is that he’s intelligent in terms of moving around the pitch. He knows when to get between the lines. He knows when to go in the space when he sees that someone is available to make a chip. He arrives at the second line fantastically.

“He supports the midfield when they are building up and struggle a little bit, and when teams are putting a lot of pressure on them.

“He can play long, he can play short, little passes. He has the personality to take free-kicks and penalties. He’s not scared. He doesn’t hide. I think Man United made a really good choice. A really good signing.”

Adapting to the Premier League is no simple feat. It usually takes players time to get used to the physicality and fast paced nature of the league, but it hasn’t been a stumbling block for Fernandes.

Although his performances in Portugal gave an indication of what was to come, such an instant impact took many by surprise.

“You looked at the player at Sporting Lisbon and clearly he was someone who scored a lot of goals and someone who created a lot of goals, but there’s always a challenge as to whether they can translate that to a better league and into a new club,” British journalist Richard Jolly told CNN Sport, adding that he saw no realistic way of United finishing in the top four without Fernandes.

“But he’s been a transformative player and a revelation in terms of how quickly he’s done it, I mean it really was from day one.

“You look at both the goal tallies and the assist tallies, and they’re fantastic. If you could maintain that form over the entire season, that’s an incredible player there.”

Whilst his individual brilliance is evident, Fernandes’ arrival has seen the uptick in the form of players around him.

The attacking trio of Anthony Martial, Mason Greenwood and Marcus Rashford scored at will after football returned from lockdown (the team has scored 22 goals in its last nine league games), and the likes of Pogba and Nemanja Matic have looked more settled in the midfield.

Pogba, in particular, is a different player to one who was seemingly weighed down by the pressure of being the biggest star in the starting lineup.

The Frenchman’s relationship with the club appeared to reach rock bottom earlier this season, with constant rumors linking the midfielder with a move away from the club.

Fans also grew frustrated with Pogba for spending much of the season on the treatment table after suffering two ankle injuries. When they did catch a glimpse of him on the field, he often underwhelmed.

But now, since he returned from his latest injury after lockdown, there have been early signs that a partnership with Fernandes could flourish and the World Cup winner suddenly looks more comfortable.

“I think Pogba likes to be surrounded by big players and big characters in their own right, I don’t think he wants to be the only big name there, and thus have all the pressure lumped on him,” Jolly said.

“I think he probably doesn’t want to be in a midfield where he’s surrounded by mediocrities. I think you’ve seen signs already of a bit of chemistry between Pogba and Fernandes which helps, but I think he also just appreciates the element that he’s playing with other quality players around him.”

Fernandes had been linked to a move to Old Trafford throughout 2019 and there had been disappointment when the deal wasn’t completed in time for the new season.

So, when the transfer got over the line in January for an initial $61 million (£47m), fans were ready to see what all the fuss was about. It’s safe to say they haven’t been disappointed.

Mark Goldbridge, a United supporter and presenter of fan channel The United Stand, cannot wait to see how the team develops.

“I sort of liken it to what Eric Cantona did when he came to Manchester United from Leeds [in 1992] and we won our first Premier League title,” he said. “It was sort of the kick-start for some real success.

“Now, I’m not saying Bruno Fernandes is going to lead Manchester United to the same level of success that Cantona did but he’s not just one player coming in and making us great.

“It’s one player that’s come in and made everybody else around him better.”

It’s easy to forget that Fernandes has only been at the club for a matter of months but he’s already established himself as a firm fan favorite — with one particular moment, in a game against local rivals Manchester City, a defining one of his short time at the club.

Fernandes got involved with a sideline feud with Pep Guardiola, resulting in the Portuguese player putting his finger to his lips and shushing the City manager.

“I think Bruno, in a very short period of time, has certainly come in and really grasped what Manchester United is all about,” said Goldbridge.

“Ultimately, there’s a thin line between grasping what Manchester United is all about and actually just being somebody who loves the game, wants to play the game in the right way, and is passionate to win.

“I remember his little argument with Pep when we played Man City, and the fans loved that because I think Fernandes just wants to win.”

Whilst United’s form dropped for the final two games of the season, fans will be holding on to those encouraging signs of life and hoping this isn’t yet another false dawn at the club.

The third-place finish, although not befitting of the club’s true ambition, must be seen as progress and attention can now turn to winning the Europa League, which is set to resume on August 5.

United face a simple task in their second-leg tie against LASK on Wednesday, leading 5-0 from the first leg and all but guaranteed a place in the quarterfinals.

Although winning European football’s secondary club cup competition is nothing to be smirked at, the real prize is still the Premier League.

Despite all the improvements seen at the club in recent weeks, the gulf between it and the likes of Liverpool and Manchester City remains wide — it finished 33 points behind eventual champion Liverpool this season.

A productive summer in the transfer market could be just what United needs, and Borussia Dortmund’s Jadon Sancho is just one of the names being linked with a switch to Old Trafford.

There had been signs of success during both Van Gaal and Mourinho’s time at the club but something does feel different about United under Solskjaer.

Maybe a return to its glory days aren’t too far away.

“It does look more sustainable and one of the things that they’re doing is they’re not just beating teams but, if you look at that winning run, they’ve won quite a lot of those games comfortably and quite emphatically, and, quite entertainingly,” said Jolly.

“I think what you might see next year is not necessarily United winning the league but them getting in the top four a lot more comfortably.”